Shawston’s first ever annual conference took place in May 2014 in the city where it all started nearly  50 years ago…Manchester.

The famed Manchester weather didn’t disappoint, it rained hard all day, but the warm smiles and enthusiasm of the delegates brightened the grey sky.  It was fitting to host the conference in Manchester, but to also celebrate the many historic aspects of this great city.  Shawston support a local community charity, click on the link to watch the video www.forevermanchester.com

Shawston does not have a hierarchical or status driven approach to business.  Everyone in the company was invited to attend the conference, from drivers and storemen through to office staff, external sales and management.  Over 70 delegates attended which is 85% of the entire workforce – all giving up their weekend to get closer to the company and team build. 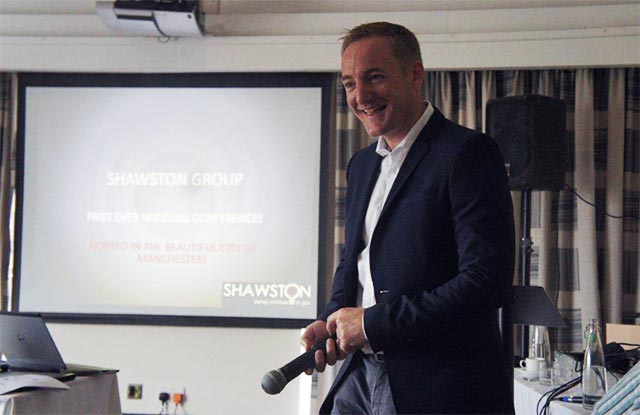 Managing Director, Rob Davenport said “The Company has grown incredibly quickly during the past two years.  We invested almost £4 million in the business during the recession using 10-years of retained profit plus some debt to expand our branch network, transport fleet, recruit new people, acquire a competitor and substantially deepen  stock holding.  We backed a strategy of exploding out of the recession and it has paid off.  It is now important we communicate internally and share the company vision and aspiration with our team members to make sure everyone is aligned with what we are trying to achieve”.

There were some key themes of the conference:-

Shawston are incredibly proud of its staff retention record and each recipient of a long service award received a £150 gift voucher, a framed certificate and an extra days holiday. The long service awards can be seen here.

Employee of the year awards were voted for by the people, for the people.

Group employee of the year –

Following the business end of the conference, a formal meal was followed by a rather less than formal comedian who brought down the house!  A magician floated from table to table and gradually the disco became louder, the bar less stocked with drink and the real party got into full swing.

The event was a huge success, the relatively new and young team from Shawston Glasgow said “It was a brilliant event, it really helped us understand more about the company and the opportunity we have within it.  To meet the teams from other branches was fantastic plus we were voted the best dressed in the room!”

An interim conference is being planned for October 2014, watch this space.