In the early part of 2014, Shawston Group invested in the region of £100k in the expansion of the Shawston Steel Tube Processing & Distribution Centre.  Shawston Tube was acquired in 2010 at a point where the old company had been badly affected by the recession. It became a natural fit with the core Shawston business and today, Shawston Tube sells direct to bulk stockists and fabricators as well as servicing the Shawston sites on a day to day basis.
Success in 2013 demanded that more square footage be dedicated to cutting, threading and roll grooving steel tube.  A large program of warehouse enhancements and the introduction of two new grooving machines, two new saws and two new threading machines have combined to create a capacity for Shawston Tube to handle over 6000 tons of steel tube per annum. 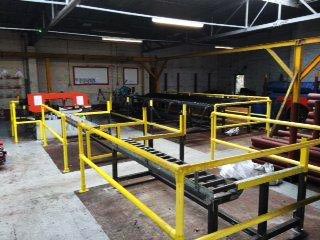 Group Operations Director, Mark Dyer said “Managing the refurbishment and capital equipment commissioning was a challenge at a time when we were already very busy through trading.  The team at Shawston Tube is first class and they pulled together working hand in glove with our in-house team of builders and property managers.  Today, we have a much more modern Shawston Tube, and we have massively enhanced our tube capabilities, notably with an ability to mass produce special cut lengths to a tolerance of +/- 1mm.  We are now actively selling our unique services to a greater effect and we are finding it so much easier to service a rapidly growing Shawston.”